I’m happy to post an update that this blog was published by the Anthropology Department at UCL through their publication ‘The Anthropolitan’. You can check them out and read that version here.

Sankalp se Siddhi is a mega campaign by the BJP to create a ‘new’ India from 2017-2022. Modi claims it is a movement against corruption, poverty, and filth. But what of  entrenched racism, sexism, and extremism? What vision for the country is there in Sankalp se Siddhi without the BJP’s politically orange-tinted glasses? The danger in arbitrarily declared campaigns such as Sankalp se Siddhi is that they run the risk of normalizing a state-sanctioned homogenized idea of what does, or doesn’t belong in a proper nation like ‘New India’.  A ‘New India’ isn’t an objective entity and symbol of success. A ‘new’ nation necessarily begs the question whose ‘New India’?

When Modi announced Sankalp se Siddhi, he urged citizens to use any means to undertake the campaign, even online mediums (IndianExpress). Apparently, journalistic integrity and courage is not an acceptable medium to fight for a ‘free’ India. On September 6th, like most mornings, I flipped through three different newspapers with my usual chai, shocked to see the assassination of Gauri Lankesh plastered over every cover page. A journalist and activist from Karnataka, Lankesh lived her life in passionate opposition to right-wing Hindu extremism. She was recently awarded the Anna Politkovskaya Award posthumously for her tireless efforts to fight caste-based discrimination and the violence in modern Hindu nationalism, officially adopted by the BJP, known as ‘Hindutva’. Like Politkovskaya, Lankesh fearlessly criticized human rights abuses in her increasingly autocratic country.

Clearly, belonging to a nation, especially the likes of ‘New India’, is a conditional citizenship. In a country of 1.3 billion, citizenship and belonging isn’t a status claimed by everyone. This isn’t unfamiliar to me as a Canadian –  I need only  look as far as Attawapiskat or the Vancouver downtown East Side to see who lives on the fringes of the red maple leaf. However,  the degree of violence which the Indian public authorities employ in constructing a uniform nation is striking Lankesh’s assassin is unknown, but the BJP’s failure to condemn the murder remains a suffocating silence.

Lankesh’s voice shouted out for those with tenuous belonging. Tribal peoples whose homes are flooded by the Sarovar Dam, and villagers whose farmland will be parceled up and handed over to the $17 billion bullet train project. For villagers’ livelihoods and freedoms, the BJP also falls silent. Just last month, Modi approved the final stage of the Sadar Sarovar Dam – one of the largest mega dams in the world. With the BJP in power in the three participating states of Gujarat, Maharastra, and Madhya Pradesh, big ‘D’ development has silently bulldozed all opposition after decades of protest. I was barely 16 when I read about social activism and environmentalism in the Narmada Valley by Vandana Shiva and Arudhati Roy. Missing from the front cover of every newspaper today were the voices of roughly 50,000 displaced people, and burnt-out activists who’ve spent a lifetime pushing for independent reviews and legitimate social and environmental impact assessments.  Not to mention the fact that the only fully-complete canals are in the economic centre of Gujarat, leaving drought-prone Kutch and Saurashtra with minimal lucrative benefit (Thakkar et al., 2017). Even water flows asymmetrically towards the citizens who matter. 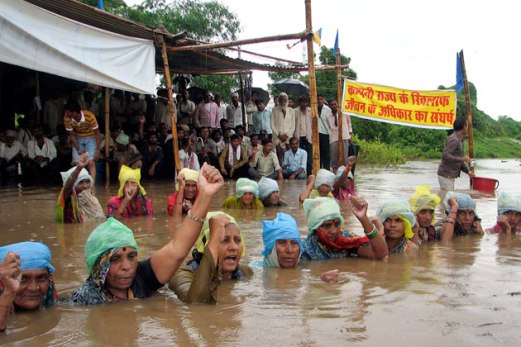 The last citizens to be consulted in Development & Dams are isolated communities, like pastoralists in the desert Kucth, some 400 kilometres from the state capital. Working for a rural development NGO has solidified the reality of ‘tarmac development’ for me – where the voices that matter, even in purposefully targeting under-represented communities, are those that are convenient to locate. Amazingly, NGOs and CSR units under India’s mandatory CSR policy are genuinely invested in supporting rural livelihoods across India. Ironically, I travel some 5 hours to rural location for work, while right across from my flat I look onto Gulbai Tekra slums, colloquially known as ‘Hollywood basti’.  At Hollywood, seasonal migrants sleep, eat, and cook out in the open, often engaging in craftsmanship such as the making of religious idols. Despite residing in the capital of one of the richest states in India, as migrants of scheduled castes, no one is particular concerned with urban livelihoods of Hollywood basti dwellers. I’m pretty sure these residents aren’t receiving water or electricity from ‘New India’s’ Sarovar Dam either.

Though the conditionality of belonging in India is inextricably linked to poverty, exclusion is not only drawn across economic and caste lines. Young women in India are subject to one of the most sordid underbellies of a patriarchal society. The nauseating violence, rape, harassment, and discrimination women and girls face on a daily basis is the greatest barrier to belonging – undermining any progress to an improved ‘New India’, whatever the term may mean. Gender-based violence in every form is widely known, reported, and yet remains a thriving business – and this is only the fraction which is glimpsed by the public realm. Watching the acclaimed film Pink with a close friend, we couldn’t finish the screening without pausing to share experiences of harassment. Pink won the National Film Award, and was specially screened at the United Nations headquarters. Pink uncovers everyday sexism in contemporary India – from micro-aggressions to structural legal bias, showing that the lives of women (especially young, single women) continue to be policed, challenged, and broken in devastating ways. Women too hold a precarious pass to belonging in ‘New India’.

The fundamental point which a state-sanctioned homogeneous idea of ‘New India’ misses is that India is a country of beautiful, complicated contradictions. These words are not mine, but were uttered by my spirited flatmate over rooftop chai. Whatever one thing exists in India, the exact opposite is also true, existing in a parallel space within the same geographical borders. Right-wing nationalism alongside socialism, conservative family values alongside individual freedoms, sexism alongside feminism, and violence alongside blissful spirituality. Ultimately, one of the greatest (female) Indian writers of all time encapsulates everything which singular visions miss:

There’s no such thing as an Authentic or Real Indian. There is no Divine Committee that has the right to sanction one single, authorized, version of what India is or should be. There is no one religion or language or caste or region or person or story or book that can claim to be its sole representative. There are, and can only be, visions of India, various ways of seeing it –honest, dishonest, wonderful, absurd, modern, traditional, male, female. They can be argued over, criticized, praised, scorned, but not banned or broken. Not hunted down. Railing against the past will not heal us. History has happened. It’s over and done with. All we can do is to change its course by encouraging what we love instead of destroying what we don’t. There is beauty yet in this brutal, damaged world of ours. Hidden, fierce, immense.

[The views expressed in this piece are entirely my own and in no way represent the opinions of AKFC, GAC, or my host organization.]

Parsai, G. “Who Will Shatter the Conspiracy of Silence Around Those Displaced By the Sardar Sarovar Project?”. The Wire. 19 September, 2017. https://thewire.in/179016/sardar-sarovar-displacement-rehabilitation-narmada/