A small village tucked among massive Afghan ruins on a plateau in Madhya Pradesh, Mandu is a peaceful and underappreciated ancient city. Once the capital of Dilawar Khan’s kingdom, Mandu is sprawls a modest 20 km radius upon hillside ridges, housing World Heritage mosques, tombs, and palaces among wheat fields and kitchen gardens. As a last minute decision, I booked a one-way sleeper bus with my friend Sujit, and we escaped for 2 days of leisurely cycling around the ancient city. We reveled in awe of the thousands of ways the gentle winter sun refracted through windows, jaalis, and darwazas mostly forgotten by Lonely Planet and mainstream tourism. Shadows and light would change every hour of the day, allowing for endless photo opportunities and exploring. 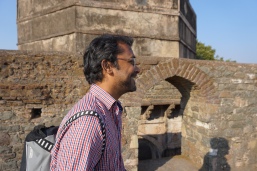 Mandu is a proper village. I have spent time in different villages in Saurashtra for work, but the style of houses, as well as some norms of daily life, were very different in Mandu than from Gujarat. Most exciting for me was the grammatically-perfect Hindi spoken by every local, from the paan-wala to our hotel owner – for once in my life I didn’t need a play-by-play translation. As per usual in any village, the hospitality of locals was unimaginably kind. Our hotel owner allowed us to check in at 7 a.m. when we stumbled frozen and shivering off a state transport bus, and hurried to offer us chai and aloo paratha while he was still standing around in his towel, scratching his head. We rented bicycles from his friend down the road, and his brother gave us advice about how to plan out our day.

Mandu was founded as a fortress retreat in the 10th century by Raja Bhoj and conquered by the Muslim rulers of Delhi in 1304. The Afghan Dilawar Khan, set up his own little kingdom in Mandu in the early 1400s. It was Dilawar’s son, Hoshang Shah, who shifted the capital from Dhar to Mandu and raised Mandu to splendour. Unfortunately, Hoshang was poisoned after just one short year of ruling, and his poisoner, Khalji, controlled Mandu for the next 33 years. Khalji’s successor, Ghiyas-ud-din, was an interesting character who is rumoured to have an insatiable love for women, with a harem of thousands of beauties from around the world. He was eventually poisoned by his own son! Years of feuds and invasions saw the small kingdom pass through many hands, from Mughals to Marathas, until Mandu’s slow decline began in the mid-1700s when the capital was shifted back to Dhar.

The most amazing part of going somewhere not-touristy is the solitude and silence. Growing up on an island on the West Coast of Canada, and later moving to an Indian city of 7 million, made me realize how much we take this for granted in Victoria. It’s not unusual on the island to have the whole mountain summit to yourself, or to stumble upon a hidden beach crescent. Mandu was the first time in India where I stood truly in solitude on the ruins of an old palace, listening to the wind move through the wheat fields. 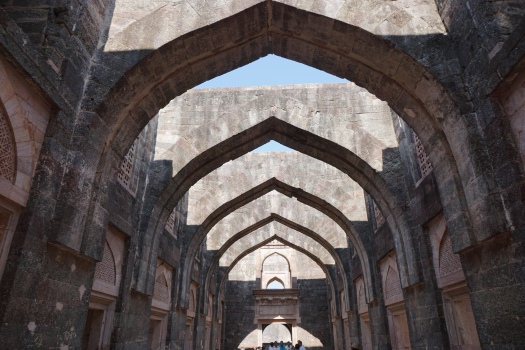 That being said, tourism is growing, especially among Gujaratis and families from Indore who are eager to make the weekend trip. At the most popular monuments, like the Jahaz Mahal and Jami Masjid, hordes of school children in pinafores, and extended Guajarati families picnicking, would chase after me for a selfie in a surprisingly aggressive manner. I always say ‘no thank you’, but Sujit suggested I start charging 50 rupees per picture! Jokes aside, I hope more visitors were clicking pictures of the architecture instead of my sweaty face. Mandu is an excellent example of the fluidity of Mughal and Hindu architecture, borrowing aspects from each tradition to combine into one building. The tall, simple yet grand onion-shaped peaks and archways the Mughals are famous for, but also clean geometrical lines and detailed intricacies like lotus flowers which are more associated with Hinduism. Many of the structures used to have tiled inlays of blue, white, and turquoise, but these are almost completely gone today, exposing the soft sandstone underneath.

The Jahaz Mahal, or Ship Palace, is the most famous site, and is said to create an essence of sailing while you’re standing in the palace. The palace lies between the banks of the Narmada River, and a small lake, catching the natural breeze and cooling the grounds. Jahaz Mahal has an incredibly sophisticated system of water collection and management.  Beautiful curlicues carved in the ground, collect and filter rainwater from the roof. The palace has many wells, and also pools used for rainwater storage and relaxing, carefully placed in order to keep the palace cool.

Unfortunately, the food in Mandu was less than desirable than the architecture. Home to about 2-3 restaurants, our expectations were low…but not that low! Luckily, a kind chai-wala made us double-rounds of special coffee both days – strong, but not too sweet, which we paired with samosas. After asking around with the other vendors in the tiny town square, we discovered a hidden family-run roadside joint tucked behind Jami Masjid. Serving dal baati as well the local variation with ground corn, we tucked in a for a full thali feast, as all the servers ensured our dal and sabzi bowls were hot and filled.

On our last evening before we began the journey of state transport bus – Dhar – sleeper bus, we rented someone’s motorbike and drove just out of Mandu, passing through all the old gates of the city, some still attached to crumbling walls. We followed the winding highway and then veered off to 2 monuments perched on the edge of a cliff. We meandered slowly to the furthest outcrop just as herders made the long trip from the valley uphill with their goats at the end of the day. Mandu’s sunsets are incredible, as the golden globe dips below the valley, turning pink, and illuminating the curvatures of all the surrounding cliffs and plateaus. Even the car horns faded away in the dusky light, and only the mild winter breeze interrupted the peaceful daily ritual.

This blog post is dedicated to Suji-bhai of course.