On the far-flung Western edge of India lies Diu, a sleepy island gateway to the Arabian Sea. In the extreme South-West of Gujarat, Diu was one of the first points of Western contact with the Indian continent. In its heyday in the 1500s, Diu boasted enough strategic and trade importance  that the Portuguese, Mughals, Ottomans,  Sultans of Gujarat and even the Dutch bickered, sieged, and fought over the tiny port, forming shaky alliances but a formidable fort in self-defence as ownership of the town flip-flopped. Diu lost its time in the spotlight in the 18th century with the establishment of Bombay as a major trading port. Interestingly, the Portuguese controlled Diu for 424 years – right up until 1961 – supposedly the longest period of any colonial rule in the world!

The Portuguese and Catholic influence in Diu is obvious, with massive cathedrals and seaside promenades. But it is unmistakably still Saurashtra – bright and pastel square-shaped bungalows, sleepy cows, strong chai, and coconuts. For some reason the island remains far, far off the tourist track – likely due to its relative remoteness. That came with some pros and cons for Ananya, Sujit, Christian and my weekend visit. Pros: not crazy busy, excellent weather and swimming, and decent prices. Cons: mediocre food and accommodation, and the (near) impossibility to rent a motorbike! The other fun dynamic to toss into the island mix is the ubiquitous presence of alcohol. Gujarat is a dry state, but because Diu is a ‘union territory’ it has its own governance system, and thus prohibition does not stand here. Without fail you can find cars loaded with Guju families crossing the bridge for a weekend of fun. But no matter where you are, something about island life = relaxation (I grew up on a west-coast island myself, trust me). A lot like my hometown, people in Diu seem to take their beers to whatever quiet corners they sought out with friends and families. We spent the weekend doing the same, roaming by foot and bike completely undisturbed from one end of the island to the other.

Diu has top sights everyone rushes to see: St. Pauls’ Church, Diu Fort, and Naida Caves.  And rightly so! Cascading with bougainvillea, the impressive baroque front façade of the church is surrounded by a manicured European-style garden, as if airlifted and dropped there from Portugal itself. More importantly, it is in walking distance of O’Coquerio – the best eatery on the whole island. Run by a Portuguese-descendant family, O’Coquerio serves amazing fish curries and fusion food in a hidden garden full of books and whimsical decorations. We couldn’t help but return and spend a lazy afternoon at O’Coquerio…but I wouldn’t advise eating that much before the overnight bus (oops).

Diu Fort is a structure of military pomp and practicality with a moat, canons, and massive sandstone walls facing three sides of the ocean. Admission is free, and there’s plenty of space to wander around, though you have to scramble far along the walls or staircases to avoid families and young couples clicking selfies at every corner. 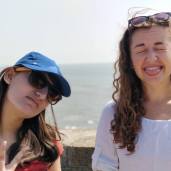 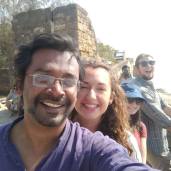 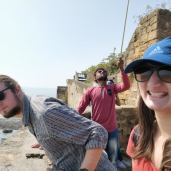 I think we spent more time at Naida Caves than the fort. Nearly by accident, we visited the caves on our last morning as a ‘why not’ destination to check off the list. A strange man-made rock formation leftover from sandstone excavation, with the addition of natural caves and banyan trees, made for a mystical morning.  The sunlight pouring down into the caves was perfect.

While I would recommend every major sight on the Lonely Planet list, the best part of Diu is finding hidden beaches and sunsets. We strayed from the main beach and spent all our time just across the bridge, on a stretch of sand remarkably empty. The water may not have been as turquoise and glimmering as Goa, but after months of pollution and winter in Ahmedabad, swimming in the Arabian Sea was liberating. After three days of meandering, swimming, and eating we left refreshed with our pockets full of sand and seashells, dreading the long night bus home.